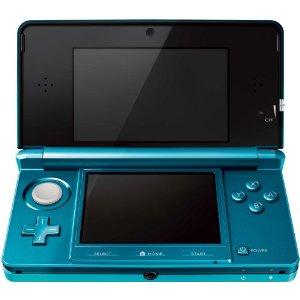 Nintendo is introducing its new 3DS system. Gamers will experience an incredible gameplay that features a real 3D graphics. And this does no require special glasses! The new copnsole is a trully breakthrough in the indusrty of portable entertainment. This is a real cutting-edge piece of hardware. It's hard to believe before seeing it... it's hard to believe even after seeing it!

The new 3DS console from Nintendo establishes a whole new world of amazing gameplay possibilities. The console's stereoscopic 3D display screen gives objects within the game world an unforgetable feeling of space and depth that actually extends far beyond the back of the screen. It allows to see the position of characters and obstacles in the 3D world, making many games even more intuitive.

The console's built-in 3D Depth Slider allows players to adjust the intensity of the 3D effect. The 3D feature can also be turned down completely - all Nintendo 3DS games and applications can be played in teh old-fashioned 2D, and look better compared to any Nintendo console before it.