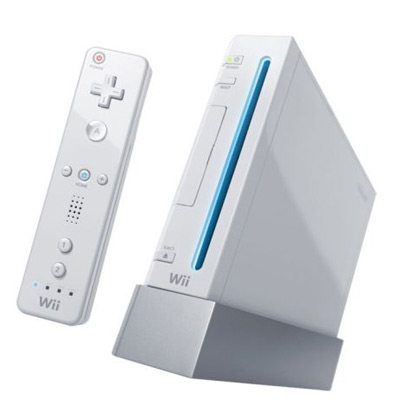 Wii is Nintendo's home video game console, and is available in two colours, black and white. Nintndo Wii represents a considerable step into a new era of game entertainment. Video games are growing in their popularity but obiously also in their complexity. In Wii console Nintendo revolutyionazies the way you play, by increasihng the fun.

Gaming has recently become overwhelming to many gamers. Wii console brings gaming back to simple times, at the same time improving the game developmnent to a new level. Such features as the Wii Remote give adults a chance to play games with their kids. It provides gamers and non-gamers opportunity to share the same gaming experiences by providing this new generation of entertainment.

The Wii console brings an incredible feeling of involvement into the game, such that makes players feel like you're in the game. For example sword battles are no longer tied to pushing a button, rather with unique Wii Remote controller, the game puts you right in the middle of the action. Forget about obsolete way of pushing a button to make a golf backswing. Nintendo Wii allows you to swing the club. Video games have been a large part of a gamer, now gamers get to be a part of the games. Enter the next level of gaming.

Wii Remote offers a new intuitive, and more natural way to play games by its wireless and motion-sensitive technology. The controller translates gamers movements into the conventional motions. When a gamer hits a drum, swings a bat or as tennis racket, the Wii remote send the right signals to the console and makes playing much more fun.

Wii console also includes Wii MotionPlus sensor. This can be attached to Wii Remote for an even better precision and immersion in some games such as Wii Sports Resort.

The Wii Nunchuk sensor is best for playing most immersive, and heated gameplays ever offered. You can use it as your sword and shield to defend Hyrule in The Legend of Zelda: Twilight Princess. Or for example you can use it in Metroid Prime 3: Corruption and the gritty underworld of Red Steel.